Impacts of the North Pacific Current on salmon productivity

The North Pacific Current (NPC), which flows west-to-east across the Pacific Ocean and transports warm water from subtropical to subpolar latitudes, generally broadens and slows as it moves toward North America, eventually splitting – or bifurcating (BI) – into the northward-flowing Alaska Current (~60% of water volume) and the southward-flowing California Current (~40% of water volume). Although even small shifts in the relative fractions of the northward and southward water volumes may affect the current’s rate of flow, at its terminus the velocity of the NPC is primarily determined by the intensity of the North Pacific Gyre Oscillation (NPGO). But the breadth, path, and flow rate of the current are not static and may in fact differ considerably from one year to the next. Such variations in the fundamental properties of the NPC may have tremendous implications for ocean conditions, food resources, and, consequently, salmon stock productivity in the Northeastern Pacific Ocean.

In this study, a team of researchers led by Michael Malick of Simon Fraser University examined how shifts in the latitudinal location (north-south) of the BI and the NPC flow rate (represented by NPGO intensity) affected the productivity of 163 pink, chum, and sockeye salmon stocks along the west coast of North America over a 35-year time frame. Stocks were segregated both by species and by location (Washington, Alaska, and British Columbia), thus extending over a geographical range encompassing the Bering Sea, the Gulf of Alaska, and the greater part of the Pacific Northwest coast. Changes in both the BI and NPGO were found to significantly enhance the productivity of salmon stocks in Washington and British Columbia regardless of species, with all stocks in these locations benefiting from a northward-shifted BI and a relatively high rate of NPC flow. At the species level, however, the NPGO had a much stronger effect (over two times larger) on pink and chum salmon productivity in these regions than did the BI, whereas the north-south location of the BI was considerably more important (by ~2.4 times) for sockeye salmon than was the rate of current flow. Most notably, there was a clear geographical distinction between southern and northern stocks, as variations in BI and NPGO had little effect on the productivity of Alaskan salmon stocks.

The authors concluded that temporal shifts in these two fundamental properties of the NPC had a strong influence on the productivity dynamics of the more southerly populations of pink, chum, and sockeye salmon, but not on the productivity of northern stocks, indicating that the population dynamics of salmon in the Gulf of Alaska and the Bering Sea are largely dependent on other environmental factors. 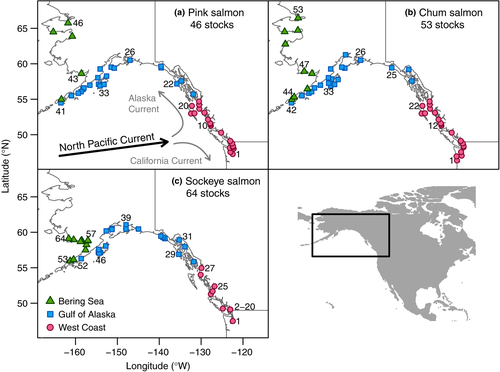