In some years, up to 90% of adult coho salmon returns fail to reach spawning grounds in waterways coursing through the developed areas ringing Puget Sound. Initially, it was assumed that the die-offs were due to a familiar cause – changes in environmental conditions, pathogens, known toxins – but it quickly became apparent that the more obvious sources were not to blame. As the mystery deepened, scientists began to turn their suspicion toward the possibility of a previously undetected agent.

A key breakthrough came in 2017, in the form of a spatial analysis of 51 coho spawning sites across the greater Puget Sound Basin performed by Feist et al. (2017). The analysis revealed that coho mortality rates were linked to both precipitation and higher levels of urban development. Construction of a predictive risk map depicting pre-spawning adult mortality suggested that death rates were high enough to raise concerns about coho sustainability in ~40% of Puget Sound watersheds, and that mortality risk tracked the rural-to-urban gradient.

Particularly notable was the strong correlation detected between coho mortality events and two factors associated with increasing urbanization, road density and traffic intensity. When considered in tandem with the link between mass die-offs and precipitation, the relationship between higher coho mortality and vehicles suggested that a chemical contaminant transported into streams via stormwater runoff was responsible for killing adult coho.

Building on the work of Feist et al. and others, scientists further narrowed the search through non-target chemical analyses of potential sources associated with automobiles, from which it was determined that the chemistry of water samples that had been in direct contact with tires closely matched that of water collected from streams during die-off events. Lab experiments further demonstrated that solutions containing tire-particle leachate were especially toxic to coho.

Although it was now evident that rubber shed from tires was the ultimate source of the deadly compound, isolating the specific chemical responsible from the hundreds in tires – as well as the countless combinations, byproducts, and derivatives thereof – remained a formidable undertaking.

That challenge was taken up by Tian et al. (2021), who, through a painstaking process of elimination and deductive reasoning, eventually determined that a previously unknown compound called 6PPD-quinone – a quinone-analog transformation product of N-phenyl-N’-(1,3-dimethylbutyl)-p-phenylenediamine, better known as 6PPD – is poisonous to adult coho.

An effective antiozonant, 6PPD is often incorporated into synthetic and natural rubber products – everything from rubber hoses to the soles of sneakers – to inhibit ozone-related degradation, as ozone weakens the chemical bonds keeping rubber intact. Antiozonants slow rubber breakdown by essentially running interference, reacting with ozone before it can interact directly with the rubber. In tires, exposure to ozone can lead to premature cracking and heat-associated aging that reduce tire stability and durability, and thus 6PPD extends tire life, improving performance and safety.

When 6PPD comes into contact with ozone, however, it fragments into several different chemical derivatives, one of which is 6PPD-quinone. Subsequent lab testing by Tian et al. showed conclusively that this derivative is toxic to coho salmon at concentrations commonly found in streams following rainfall. 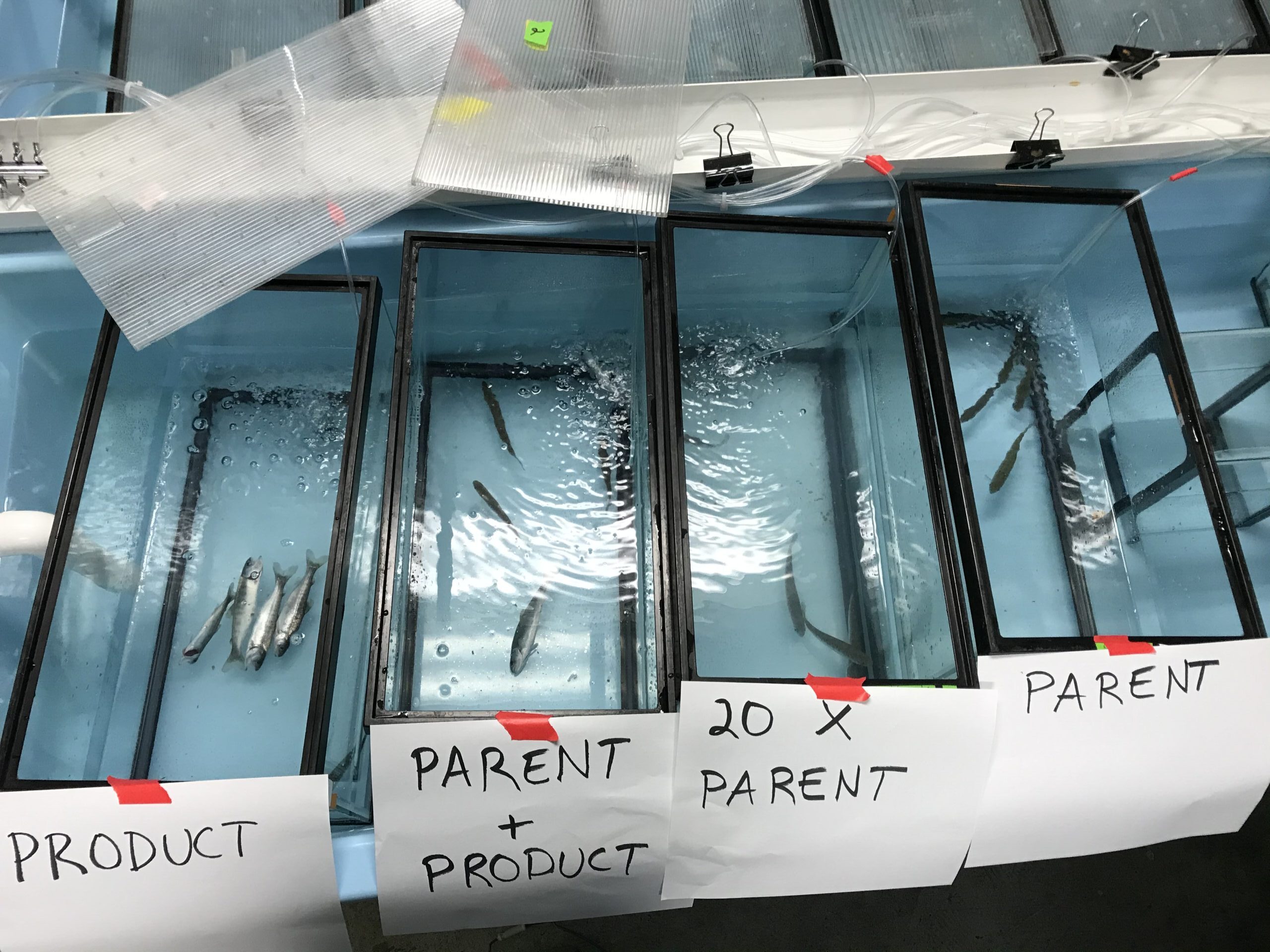 Their findings led the authors to hypothesize that when 6PPD in tire debris comes into contact with ground-level ozone – itself a product of a complex set of atmospheric reactions linked to the combustion process, and hence car exhaust – a proportion is converted to 6PPD-quinone. This compound is then flushed from roads and other impervious surfaces into nearby streams by stormwater runoff during and immediately following rainstorms, where it can reach concentrations lethal to adult coho. Such conditions only last for the relatively brief period that runoff enters streams in fairly large volumes, however, and it is this rapid buildup and decline in 6PPD-quinone levels that accounts for the sharp rise in coho mortality after rainstorms and not at other times.

How exactly 6PPD-quinone kills coho is not yet known, nor why it has comparatively little effect on other salmonids; chum salmon, for example, use many of the same streams around Seattle and spawn at around the same time, yet appear to be far less sensitive to 6PPD-quinone.

But researchers involved in the study caution that this apparent discrepancy in response among different salmonids may be misleading.

“We are learning more about the pathophysiology in coho, which we hope will lead to a mechanistic understanding of the toxicant’s action in other species,” explains Jenifer McIntyre, an aquatic toxicologist at Washington State University. “No other salmonids have been directly tested with the new chemical, but we certainly see sensitivity in other species to roadway runoff. Whether that sensitivity is due to 6PPD-quinone has yet to be determined.”

Given the density of automobiles in urban areas, it came as no surprise that water samples collected from salmon-bearing rivers and streams around cities in northern California were also found to contain 6PPD-quinone, an indication of its ubiquity. Moreover, the continuing expansion of roads and highways along the length of the Pacific Coast will expose more watersheds to 6PPD-quinone and other chemicals, putting additional salmon populations at risk.

The growing threat human pollutants pose to salmon health highlights the urgent need for development of mitigation and management strategies that address the impacts of non-point source pollution on both freshwater ecosystems and on salmon directly. 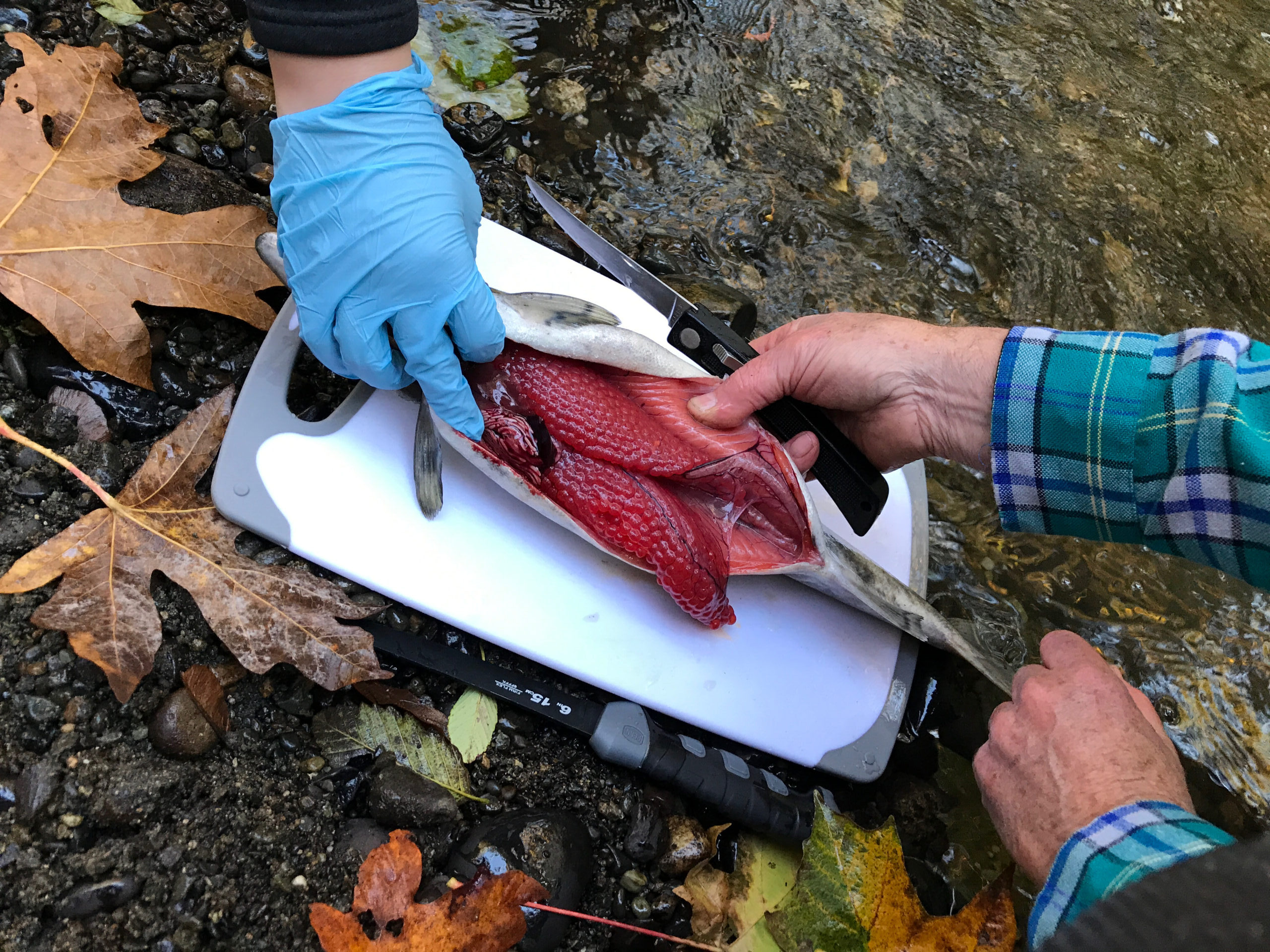 McIntyre advocates for inclusion of a combination of potential remedies to help alleviate the effects of 6PPD-quinone and other contaminants in urban watershed management. “We know that runoff containing 6PPD-quinone can be effectively treated with bioretention, an infiltrative soil media approach used in green stormwater infrastructure,” she says. “Installing more of these treatment systems – rain gardens, for example – particularly for roadway runoff is an important part of the solution. We also know 6PPD-quinone forms when ozone interacts with tires, and that ozone is created when air pollutants combine with oxygen and sunlight, especially at warmer temperatures. Traffic is an important source of those pollutants, so anything we can do to reduce vehicle exhaust will help – for example, shifting from combustion engines to electric cars.”

“Finally,” she adds, “we should replace 6PPD in tires with an antiozonant that doesn’t transform into a toxic chemical.”

Ending use of 6PPD in tires would seem to be the most straightforward solution, but for now at least, tire manufacturers are non-committal about switching to an alternative preservative. In a statement released in December 2020 in response to the study’s findings, the US Tire Manufacturers Association – a national trade and advocacy group that includes the major tire-making companies in the US – merely acknowledged that “6PPD has been studied” before adding that “not enough is yet known about the newly discovered transformation product, 6PPD-quinone” to warrant immediate removal of the compound from tires.

Industrial and commercial contaminants are an especially prevalent hazard in urban waterways, but the impacts of development extend beyond higher levels of pollution; salmon in city streams must also contend with highly modified channel structure, exaggerated flow regimes, blocked fish passages, and a greater variety and abundance of non-native species, among numerous other obstacles.

Yet there is little doubt that the increasing diversity, complexity, and concentration of non-point source pollutants pose a particularly distinctive threat to freshwater organisms in areas undergoing widespread urban development.

“The question is, what other species are being affected by 6PPD-quinone and related chemicals in the environment throughout the world?” McIntyre wonders. “6PPD-quinone is just one chemical produced from a product that most of us use on a regular basis. We need to take greater care with our product use and development to protect environmental health, including our own.”