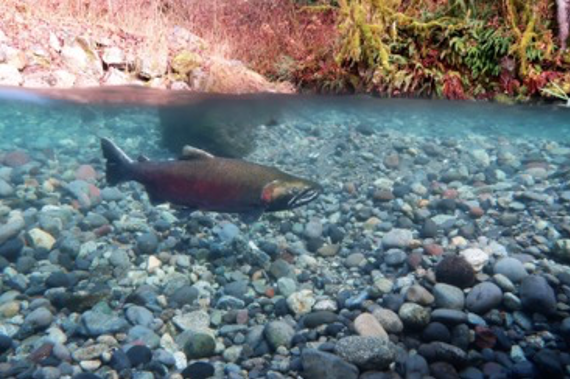 Glaciers are retreating at an accelerating rate in the face of climate change; some salmon stand to benefit, while other populations are likely to lose out. (Photo by Jonathan Moore)

Seasonal flow of glacial meltwater influences the hydrologic cycles and structures of freshwater systems throughout western North America, including virtually all of the watersheds used by Pacific salmon for reproduction and early development. As in mountainous and polar regions the world over, however, glaciers in the western US and Canada are vanishing quickly due to anthropogenic climate warming, with model projections indicating that as much as 80% of current glacier volume will have disappeared by 2100. Yet, despite the magnitude and rapidity of expected future glacier loss, how the freshwater habitats Pacific salmon depend on will be affected by the depletion of these enormous stores of freshwater has received surprisingly little attention.

To address this gap, a multidisciplinary working group supported by the Salmon Science Network Initiative developed a synthesis of the potential impacts of glacier retreat on downstream salmon habitat over time. The working group was composed of scientists from universities and government agencies in the US and Canada, and the Portland-based NGO Wild Salmon Center, with expertise in glaciology, hydrology, climate change, watersheds, and salmon biology and ecology. The synthesis was based on analysis of a conceptual model consisting of four distinct phases of future glacier extent, progressing from present-day coverage through two intermediate stages to the final phase, in which glaciers have virtually disappeared from the landscape. “Because 85% of major salmon watersheds in western North America have at least some glacier coverage, we predicted that salmon habitat will change in both quantity and quality,” explains Kara Pitman, a PhD candidate at Simon Fraser University in Vancouver, BC, and the lead author of the study. The researchers defined change in habitat quantity as the addition of salmon habitat – in the form of new streams, rivers, and lakes – created by the physical retreat of glaciers, whereas change in habitat quality encompassed projected alterations in water temperature, flow regime, sediment dynamics, channel structure, and other key environmental variables.

The analysis indicated that populations toward the southern extent of salmon range, where glaciers occur primarily at higher elevations, will likely experience reductions in flow rates and higher water temperatures with increasing glacier loss, putting stocks already at risk from numerous other anthropogenic impacts under even greater stress. In contrast, however, glacier retreat may actually benefit salmon in areas of extensive glacier coverage, such as south-central Alaska, as their physical withdrawal reconfigures the surrounding landscape and exposes new areas suitable for the formation of lakes and rivers. Such expansion of freshwater habitat opportunities could enhance salmon productivity in these regions.

In addition, the analysis shows that salmon response to changes incurred by glacier retreat will be a function of “when” in addition to “where,” in that alterations in downstream environmental conditions will vary not only geographically but also with time. Pitman points out that salmon are highly adaptive to changes in their environment, and this flexibility may allow populations to continually adjust to evolving conditions as the watersheds transition to new forms. “Salmon have evolved over millennia in rivers that were dynamic and constantly changing, and if given enough time, they are well adapted to cope with the landscape changes associated with glacier retreat,” she says. “As such, the impact glacier retreat will have on salmon populations depends on the phase of glacier retreat.”

Changes in downstream habitat as glaciers retreat over the coming decades is yet another indication of the extent of direct and indirect human impacts on the aquatic ecosystems utilized by Pacific salmon, and further complicates their conservation and management. Pitman contends that meeting the increasingly complex challenge of mitigating human-related impacts and maintaining salmon productivity into the future requires the development of broader-scale and more forward-looking conservation approaches that focus more on maintaining long-term sustainability and less on short-term outcomes. “Salmon productivity is likely to shift geographically over the coming decades, not only due to glacier retreat, but also climate change, ocean changes, and habitat destruction that are impacting salmon biodiversity,” she says. “Salmon managers must consider protection and management of the future state of salmon and their ecosystems, and not just the present.” 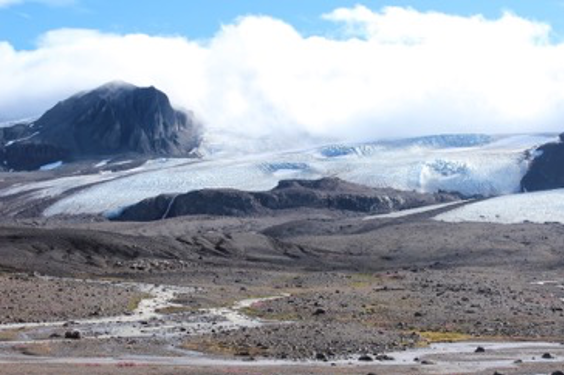 Most salmon watersheds in western North America currently have some glacier coverage but these glaciers are predicted to lose 80 percent of their ice cover over the next 80 years. (Photo by Kara Pitman) 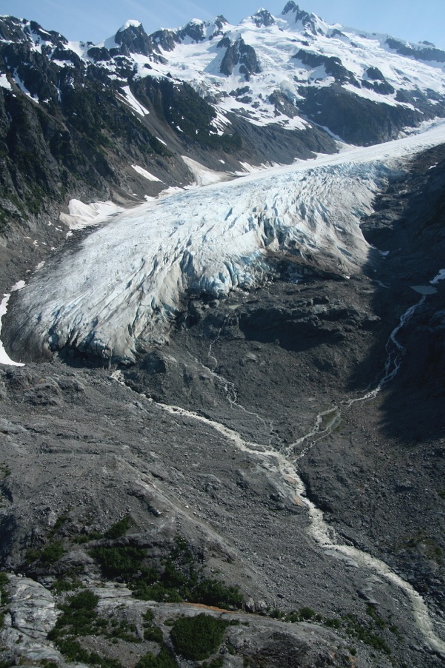 Glacier retreat is creating rivers and lakes that salmon can colonize. (Photo by Kara Pitman)