A new study has challenged the view that the past decade of declines in the productivity of Alaskan Chinook salmon populations has been driven primarily by adverse conditions within their shared marine environment.

Instead, the study points to watershed-scale freshwater conditions and the cumulative influence of multiple local and regional environmental drivers as contributing factors to the decline in productivity.

Productivity—a measure of population growth based on the number of successful (returning) adults produced from each spawner, from a given spawning year—is a critical measure for understanding the health of salmon populations.

The study, led jointly by Dr. Leslie Jones, Dr. Erik Schoen and Rebecca Shaftel, sought to understand how freshwater conditions may have influenced these declines—in particular, the 57% decline in mean recruitment between 2003-07 (compared to the long-term mean).

“During those years of poor recruitment, we were seeing high spawning densities, high summer temperatures, above average rainfall in the fall, all together,” says Dr. Jones. “It suggested to us that there may be more than one factor [marine conditions] causing these declines and that perhaps a more holistic approach was needed.”

The correlative study (looking for associations among different factors) used a hierarchical Bayesian model to investigate how relative productivity varied between 15 Chinook populations in the Cook Inlet basin, in response to nine watershed-specific and regional-scale environmental variables (indicators).

Seeking clarity in a data-deficient region

Dr. Jones, Geospatial Information Officer with the State of Alaska, says the greatest challenge of this study was simply obtaining the data for these nine environmental indicators, which included stream flow, temperature, timing of ice break up and marine conditions (North Pacific Gyre Oscillation), in data-limited Alaska.

“Up to this point, we just haven’t had the data in Alaska to carry out these studies. So, we were trying to find unique ways to characterize things like stream flow, for example,” Dr. Jones says.

In the absence of stream gauges in each watershed to directly measure stream flow, the study used gridded climate data to instead interpolate (fill in, based on downscaled climate models) data on monthly rainfall between the actual observation points and give an estimate of stream flow for all 15 populations.

Unique among Alaskan studies, this paper used stream temperature data from within the specific watersheds of each population.

With these data in hand, the study found a synchronous, negative effect across the 15 populations from above-average precipitation during fall spawning and early incubation, likely reflecting the effect of fall floods scouring the streambed.

Conversely, above-average precipitation during the summer juvenile rearing period had positive effects for most of these coastal populations, potentially through opening up access to new habitats and increasing food availability. 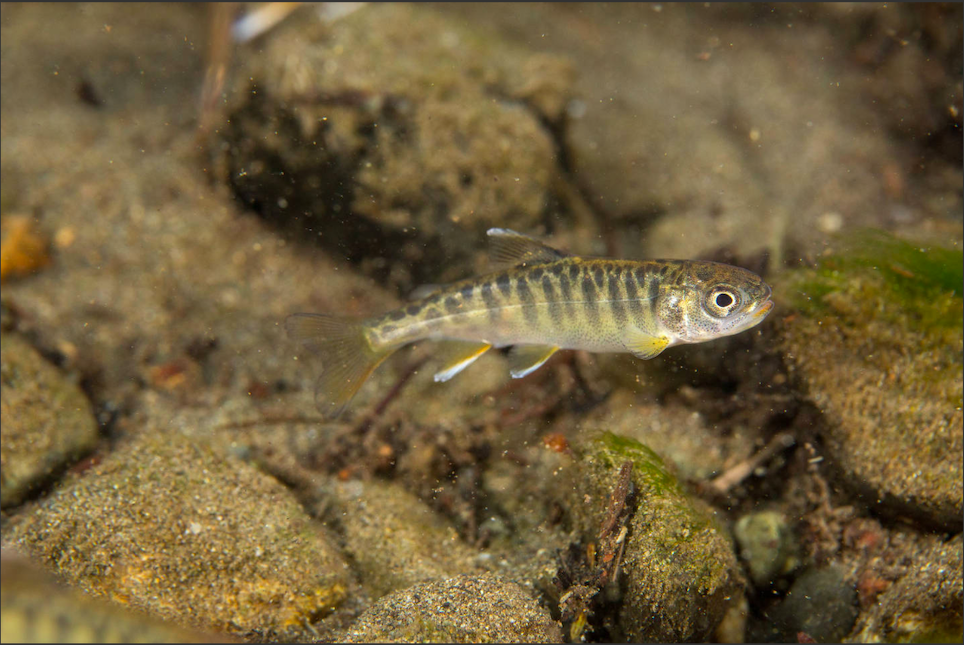 Above-average precipitation during the Fall spawning and incubation period was found to have a negative effect on productivity. (Photo by Ryan Hagerty, US Fish and Wildlife Service)

Depending on the thermal regime of the stream, the effect of warmer-than-average stream temperatures during spawning and early incubation was either positive (cool or moderately warm streams) or negative (extremely warm streams).

While this study did not have the data to assess the effects of biological factors, Ms. Shaftel, Research Aquatic Ecologist at the University of Alaska Anchorage, notes, “These warmer systems are usually the low-land systems, which are the most sensitive to climate change and are, unfortunately, also the best pike habitat. So warmer temperatures and pike predation may additively impact Chinook,” she says.

In, for example, the Deshka River—a site of pike invasion and one of the two warmest streams in the study, which saw temperatures as high as 27 degrees Celsius/80 degrees Fahrenheit in 2019—warmer stream temperatures had a purely negative effect.

The study also found a weak but variable effect of marine conditions (NPGO) on Chinook productivity, suggesting that while marine productivity is an important driver (as previous studies indicate), at least for these populations, it’s not the only one at play.

What these complexities suggest to the authors is that there are multiple environmental (and likely, biological) factors operating in tandem, but which are culminating in adverse freshwater conditions across the diverse stream habitats these populations inhabit.

“Nobody has found one smoking gun that explains all these declines,” says Dr. Schoen, Research Scientist at the University of Alaska Fairbanks. “Maybe we’re not going to.”

“Maybe these are just really complex organisms, that live in diverse habitats, and there are multiple conditions changing all at once,” he says. “Maybe we should be content with finding a range of different cumulative effects that are all contributing, without finding that one, single smoking gun.”

Freshwater influences cause for hope

While the prognosis for Alaska’s streams that face multiple freshwater stressors from a changing climate seems dire, the authors of this study suggest that their finding—that adverse freshwater conditions may have a greater influence on Chinook productivity than previously thought—may in fact be cause for hope.

“For managers, it’s almost a good thing that we’re seeing these effects from freshwater drivers,” Dr. Schoen says, “Because we have management tools to influence these effects.”

The authors suggest that human interventions, like replacing failed culverts, increasing access to the floodplain for salmon, replanting riparian vegetation and introducing green infrastructure to reduce sediment run-off could all have positive effects on Chinook productivity.

“While we didn’t study these restoration projects, our findings suggest that money spent on these kinds of projects could have real benefits,” Dr. Schoen says.

Additionally, the findings of asynchronous effects of warming waters may be beneficial from a management perspective, says Dr. Jones.

“Especially in a data-limited environment and with limited money for monitoring—managers can focus on the watersheds that are potentially being adversely affected, or may see adverse effects in future, rather than those that may actually benefit from warming conditions.”