A recent literature review—the first to systematically review studies of the impacts that estuary developments may have on juvenile salmon—has identified multiple activities and stressors that are likely to negatively impact salmon.

The review of 167 studies from the past 50 years identified what is known (and not known) about the impacts of human activities on young Pacific and Atlantic salmon ecology in estuaries.

The study considered 24 activities such as dredging, shipping and shoreline development and the environmental stressors associated with those activities, such as temperature, habitat modification and noise pollution.

The authors summarised more than 1,300 comparative statistical tests, looking at the severity of the biological impacts from 14 stressors and the robustness of the evidence for those impacts.

Among these tests, there was enough evidence to be moderately-to-highly confident in the negative impacts of several stressors, including: pollutants, sea lice, reduced connectivity (from tide gates), and habitat modification. 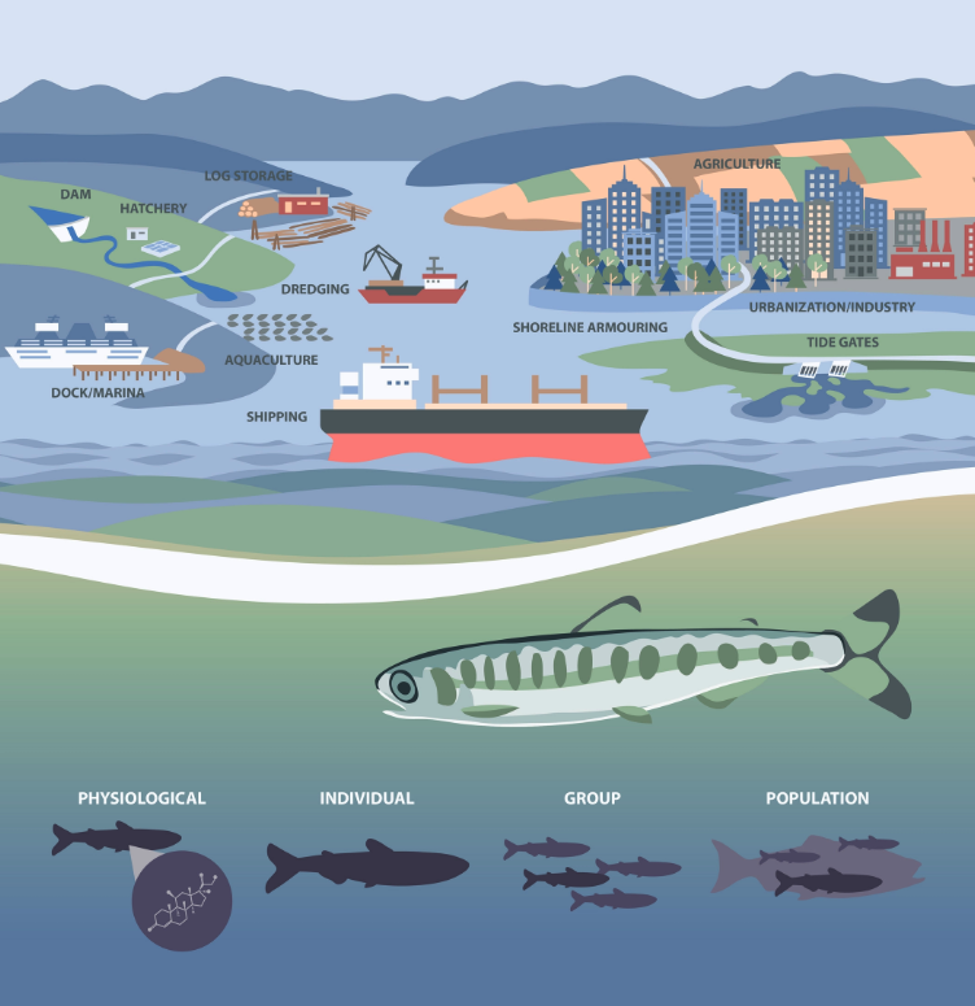 Infographic showing multiple activities that occur in estuaries and the biological scales at which impacts are measured for salmon. (Created by Fuse Consulting)

Sam Wilson, author on the review, says that while these findings may seem intuitive, the weight of scientific evidence for such impacts has not been easily available up to this point.

“It is often a challenge to synthesize the vast body of research in journals and reports, particularly within the short time frames required for decision-making,” Ms Wilson says.

That’s why, she says, reviews such as this are so important, so that the body of evidence— and indicators of its robustness—are easily accessible to decision makers when needed.

In gathering this body of evidence, the researchers undertook a two-year long review, which saw them trawl more than 13,000 peer-reviewed papers, in order to identify the 167 salient studies reported.

These studies provided the strongest evidence for the potential negative impacts from pollutants like petroleum, PCBs and heavy metals, which are often released into estuaries via industrial discharges. A negative impact was found in 51 percent of the 749 comparative tests for the effect of pollutants on salmon. In contrast, only 2.8 percent of tests found a positive impact.

The review found evidence that these pollutants can be incorporated into the tissues of young fish, resulting in a range of physiological, biological and population-level impacts.

Studies reviewed by region, showing relative numbers across the Atlantic and Pacific oceans, broken down into proportions focused on the 14 stressors considered. (Figure published in Global Change Biology)

Risk of the unknown

While the review identified several moderate-to-high risk stressors, the bulk of the evidence was biased towards a small number of stressors. For example, 55 percent of the statistical tests focused on pollutants. Thus, the review also identified key knowledge gaps requiring further consideration.

“It was pretty surprising that, for a high-value species like salmon—one of the most studied wild organisms in the world—there’s still so much we do not know about the potential impacts human activities may have on their critical estuarine life stage,” Ms Wilson says.

The review identified stressors which have potentially severe negative impacts on salmon, but which have been poorly studied, such as light and noise pollution. Ms Wilson says these ‘unknown quantities’ carry their own risk.

“Uncertainty is a component of risk,” she says. “If the stressor and activity hasn’t been studied, then there is risk that it could pose harm.”

“We have relatively robust information for some species in the Pacific, so our findings apply quite well to Chinook and coho along the coast of British Columbia, for example. But for sockeye and Atlantic salmon there’s still a lot we don’t know.”

Estuaries will no doubt continue to be prime real estate for developments and other human activities and this synthesis has the potential to be the start of building a stronger body of evidence to guide decision-makers in assessing the risks posed by those activities.