Laboratory experiments are often used to provide insights into the effects that alterations in natural conditions will have on individual organisms and populations; in the context of future climate change, for instance, such information can be used to generate relative indices of climate risks for particular species, populations, or entire ecosystems, especially those highly sensitive to temperature changes. But how accurately lab-based simulations reflect actual responses to changing environmental conditions in nature can be difficult to gauge in the absence of real-world data, underscoring the need for reliable comparative testing of lab models against data collected from the field.

Although numerous experimental studies have concluded that a water temperature of 15°C represents the upper thermal limit for embryonic Chinook salmon, beyond which mortality rates skyrocket, recent work by Benjamin Martin, an ecologist with NOAA’s Southwest Fisheries Science Center, and his colleagues found that lab estimates of the upper thermal limit of embryonic Chinook failed to match that for Chinook in a natural setting. They did so by first constructing a model of thermal tolerance fitted to lab data, following which they used available population data to estimate the number of adult and juvenile Chinook salmon in the Sacramento River of Northern California yearly over a 20-year period, which represented annual Chinook survival in the river. Their model was then tested against the observed field data to see how well it retrospectively predicted annual variation in embryonic Chinook salmon survival over the 20-year time frame. At the same time, data pertaining to the physical conditions of the river collected over the same time period showed that water temperatures in redd sites commonly used by spawning Chinook salmon rarely exceeded 15°C. Thus, according to lab results, water temperatures should not have contributed greatly to embryonic mortality, yet analysis of interannual Chinook survivorship revealed that spawner-to-fry survival did in fact vary considerably from year to year over the two decades, with temperature-related embryo mortality reaching as high as 75% in some years.

The researchers then developed a mechanistic model of oxygen supply and demand to discern possible explanations for why embryonic Chinook in the Sacramento River appeared to have a much lower thermal tolerance than did those studied in the lab, from which they deduced that lab studies tended to incorporate much higher flow rates, often up to 2–3 times greater, than that which occur naturally, resulting in a roughly 3°C overestimate of the upper thermal tolerance of Chinook embryos. As such, their analysis indicated that the actual upper thermal limit of embryonic Chinook under natural conditions is closer to 11–12°C than the 15°C established under lab conditions. This may be because winter-run Chinook eggs are large and require relatively high rates of water flow to obtain sufficient oxygen, and are thus more sensitive to the variations in flow rates that often occur in nature but are rarely accounted for under controlled lab conditions. Moreover, incongruities between laboratory and field estimates of the thermal limits of fish may not be isolated occurrences; Martin and his colleagues also developed a synthesis of lab-based studies of over 180 different species of fish in addition to Sacramento Chinook salmon, analysis of which indicated that the use of high flow velocities was a common thread among laboratory experiments involving freshwater fish.

In light of these findings, the authors suggest that lab-derived predictions of how salmonids and other freshwater fishes will respond to changes in environmental conditions – notably the elevated water temperatures expected to result from global warming – be viewed with some caution, especially in cases where field data for comparative purposes are lacking. 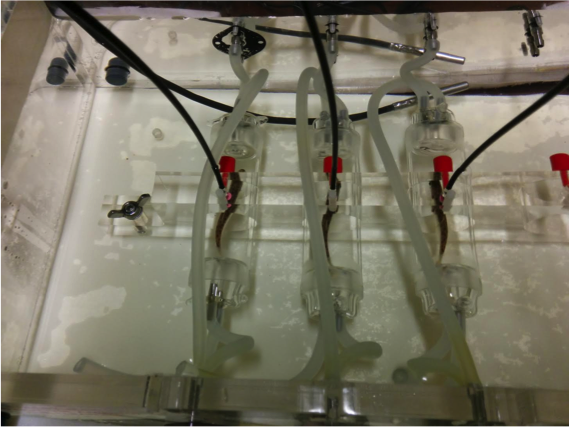