Download Paper
Download Slides
Русский Перевод
Clearcutting, selective logging, and other forest-related extractive activities have been conducted along the West Coast of North America for more than a century, yet little is known about the enduring impacts large-scale removal of riparian forests have on freshwater systems.

In the early 1970s, a consortium of Canadian federal and provincial government agencies, universities, and private timber corporations set out to address this gap by establishing the Carnation Creek Experimental Watershed (CCEW) on Vancouver Island, British Columbia. Now managed by the BC Ministry of Environment and Climate Change Strategy, one major objective of ongoing research in the CCEW was, and remains, to track the effects of historical forestry activities on salmon and their habitat over time.

To this end, data were collected on numerous stream-related variables in the small (11 km2) coastal watershed before, during, and after logging treatments, which ranged from clearcutting to waters edge – encompassing nearly half of the total area logged – to maintenance of riparian buffers of various widths. Data collection was divided into pre-harvest (5 years, to establish baseline conditions), during harvest (6 years), and post-harvest (to present, ~40 years) phases.

Previous post-harvest research showed that coho salmon initially experienced a substantial boost in productivity; smolt production, for instance, was nearly 65% higher than baseline levels for close to three decades after logging. This surge in productivity may have been partially due to reduced tree shading contributing to warmer water temperatures, which promoted juvenile development and earlier migration to the Pacific.

The apparent thermal benefit conferred to coho by logging proved to be fleeting, however, as coho productivity inexplicably fell into steep decline shortly after the turn of the century. Average overwinter survival of juveniles, formerly as high as ~50% in the mid-1990s, plummeted to ~15% by the early 2000s, where it remains at present. Consequently, annual smolt production is now below that prior to logging.

An adult coho salmon in Carnation Creek. Despite thriving for the first couple of decades after logging, coho productivity has spiraled downward in recent years. (Photo by Iain Reid)

What changes in what factors were responsible for this abrupt crash in the productivity of Carnation Creek’s coho salmon has since been the subject of considerable speculation.

In this study, David Reid, a Postdoctoral Research Fellow at the University of British Columbia, and colleagues used a 2-dimensional hydrodynamic model incorporating ~45 years of data on conditions in the CCEW to investigate the relationship between long-term variability in stream morphology and the subsequent response of coho habitat in this watershed since the disturbance.

What the model revealed was unexpected: forest removal triggered a ripple effect in several geophysical and hydrological processes that, over time, transformed channel structure and function and impaired production of coho salmon habitat. More surprising, however, was that these forces did not come into full effect until nearly three decades after the disturbance had ended.

Two primary factors were found to be responsible for the decades-long delay in the impacts of logging.

First, large-scale tree removal increased hillside and streambank erosion and thus the amount of soil and other material entering Carnation Creek, which distorted in-stream sediment regimes. Erosion wasn’t uniform, however, but was on occasion exacerbated by natural forces; in the mid-1980s, for instance, storm-related landslides dumped enormous amounts of soil and other material into the stream within a relatively short period of time.

Second, fewer trees meant less input of dead wood material, accumulations of which provide shelter for juvenile coho, create pool environments, and enhance overall habitat complexity. “Logging slash from these debris flows [in the 1980s] expanded several existing logjams and formed new ones,” explains Reid. “These logjams are important factors in controlling channel morphology, as they lead to sediment deposition upstream and scour downstream. As such, the formation and eventual breakdown of these jams had a notable effect on morphology.”

Pre-existing logjams can remain in place for long periods of time before breaking apart, however, and as such, the full impacts of this downward trend in delivery of woody material to the stream did not become fully evident until long after tree removal.

In heavily logged reaches of Carnation Creek, for instance, logjams that have taken years and even decades to collapse aren’t being replaced at the same rate or size as they were before logging due to the lack of dead trees, and thus pool formation has become far more variable than in the past. This shift has proven particularly detrimental for coho, as juveniles use pool habitats extensively for foraging and shelter. 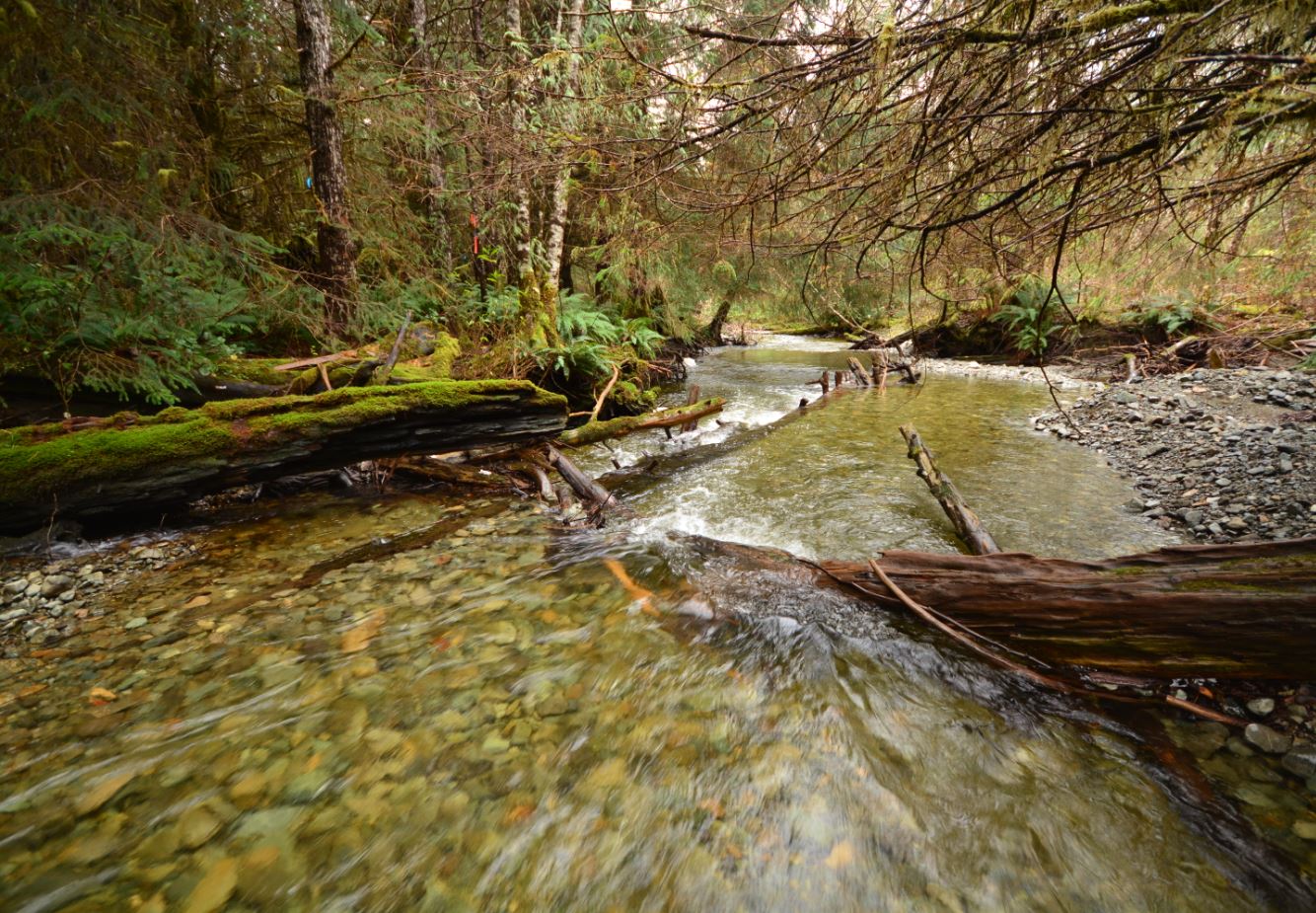 A small logjam in the Creek. Such structures occur less frequently in many reaches due to a lack of dead wood, reducing formation of pools and other critical coho habitat. (Photo by Iain Reid)

In addition to accelerating hillslope erosion and reducing dead wood input, clearcutting to the waters edge increased bank erosion, which led to a broadening of the channel in many parts of the river.

“As channel morphology changes, so does the relative abundance and characteristics of pools and riffles, and associated hydraulic conditions,” says Reid. “Along Carnation Creek, we see morphology evolve as the rate of sediment transport varies through time and along the channel, and as streamflow and transported sediment interact with in-stream structures, such as logjams. In some locations this led to the filling of pools and channel widening, leading to a reduction in high-value rearing habitat.”

The results of the analysis provide further evidence that forestry activities can continue to influence salmon habitat conditions long after harvesting has ended, necessitating consideration of potential legacy effects of past harvest in watershed management and streamflow allocations. It also underscores the need for a more holistic approach to salmon management through inclusion of adjacent hillsides and other surrounding features into stream management strategies to account for the full range of potential long-term effects of past forestry practices.