The Kuskokwim is home to the largest Chinook salmon subsistence fishery in the world. Its subsistence fishers harvests more Chinook, on average, than those of the Yukon River, a watershed seven times larger than the Kuskokwim and its banks are dotted with communities reliant on the salmon populations that home to its tributaries each year to spawn. 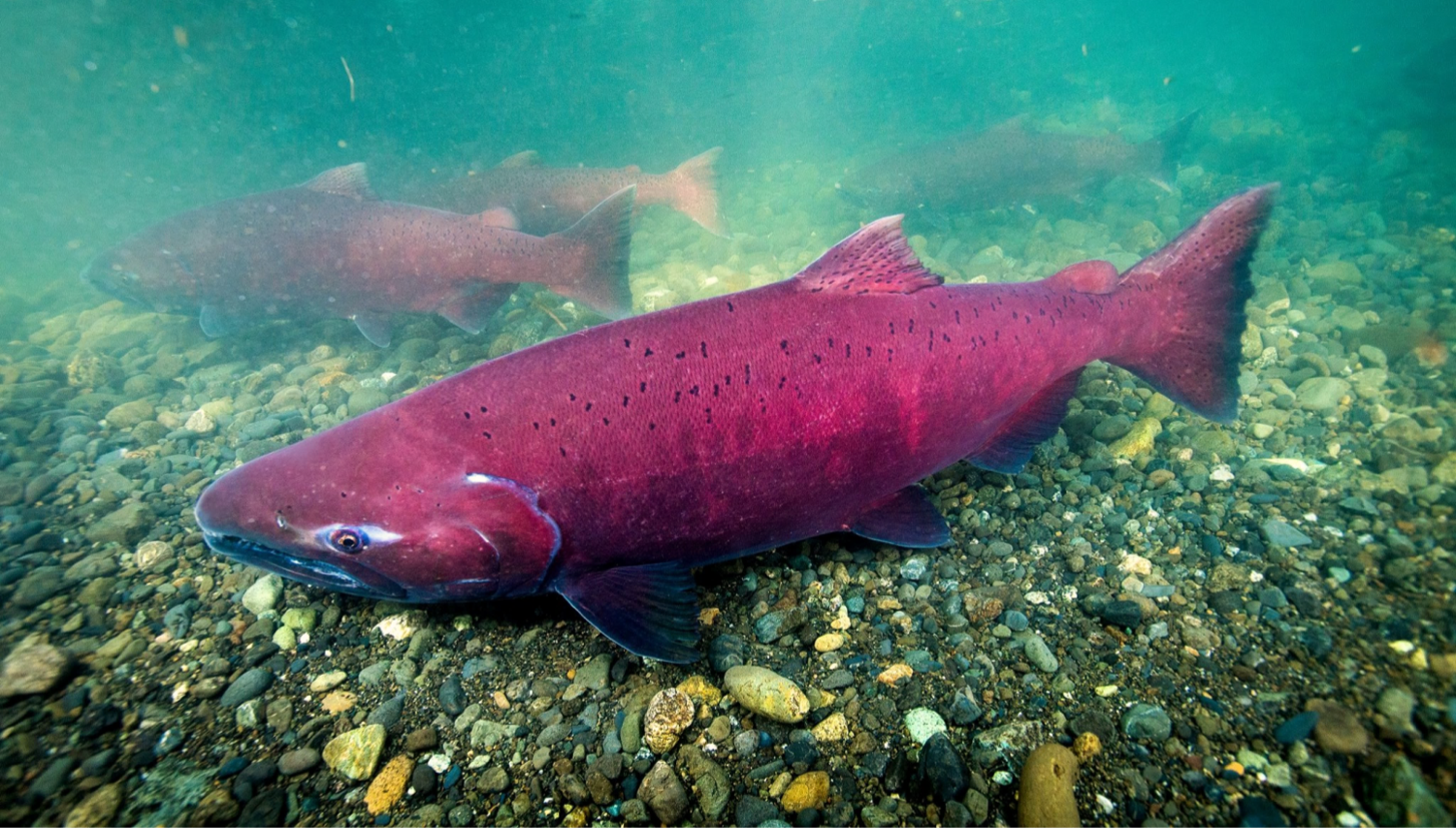 The study addressed a fundamental challenge in managing mixed-stock salmon fisheries in large river basins—how to balance harvest levels that support community (or, in other cases, economic) needs, while also conserving the diversity in the system that makes it resilient to future change.

This diversity, in the number of unique populations; their life histories (e.g., run timing), size and productivity (temporal patterns in recruits-per-spawner), confers stability in harvest to a mixed-stock managed fishery as a result of portfolio effects; whereby fisheries that harvest multiple populations benefit from the averaging effects of their variable dynamics. Typically, at least some of these populations are productive, thus compensating for the less productive (i.e. weak) populations at any given point in time.

Dr. Brendan Connors, lead author on the study, says the typical view of mixed-stock fisheries is that maximising total harvests must inherently compromise some amount of diversity.

“In theory, the high harvest rates needed to maximize mixed-stock fishery harvests have to come at the cost of risks to population diversity by increasing the chances of overfishing, or even extirpating, weak populations,” he says.

The researchers wanted to quantify this trade-off—what is the actual risk to diversity and community access to the resource, under different harvest policies? This information has been lacking from discussions of mixed-stock Chinook fisheries management in the large river basins of western Alaska and the Yukon River.

To answer this question, they fitted spawner-recruitment models to up to 50 years of tributary-level data from 13 populations (accounting for around half the Chinook production of the Kuskokwim), to characterise the degree of diversity in population dynamics among Chinook populations in the system. 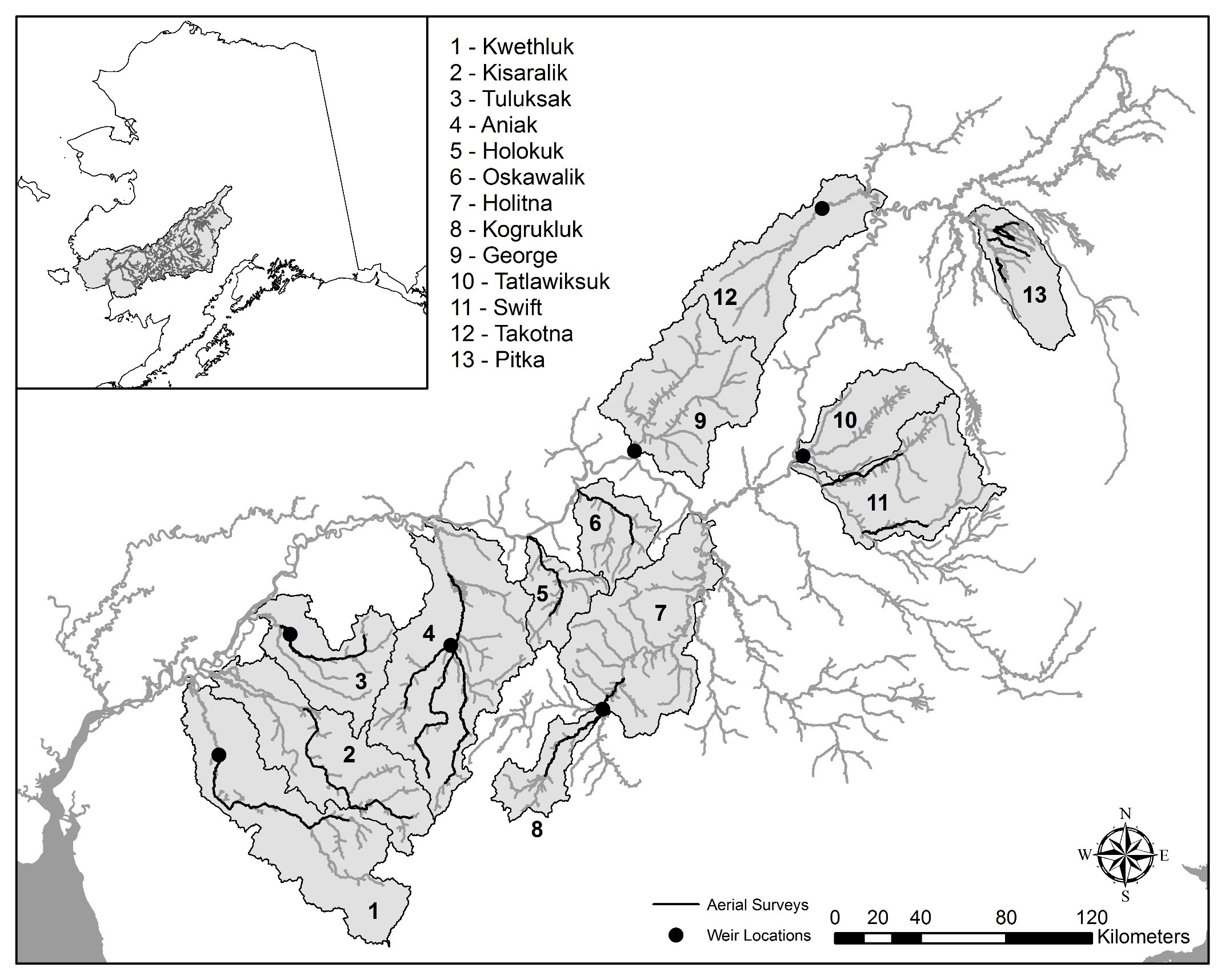 The Kuskokwim River basin. General spawning distribution of the 13 Chinook populations for which there are estimates of spawner abundance based on either weir or aerial surveys. (Courtesy of Brendan Connors)

The researchers then ran computer simulations of alternate harvest policies, under different scenarios of environmental change, to forecast the system 50 years into the future. They evaluated the performance of each policy in relation to: mixed-stock harvest, population extinction risk, tributary goals (the likelihood that a population fully seeds the habitat, which can be viewed as a proxy for equitable access to the resource for communities) and stability of harvest from year to year.

These measures of policy performance were identified during workshops with Kuskokwim residents, subsistence fishers and state and federal biologists and managers.

Dr. Connors says they found that surprisingly little harvest had to be sacrificed in order to safeguard against the risk of weak population extirpation and ensure equitable access to salmon across subsistence communities. Thus, the trade-offs between conserving biodiversity and maximizing harvest were distinctly asymmetric.

For example, reducing harvests by 20 percent compared to maximum sustainable yield (where the goal is to maximize surplus production), virtually eliminated the risk of weak population extirpation and resulted in an 84 percent increase in the likelihood that all communities would have equitable access to the resource. However, this came at the cost of a 16 percent increase in year to year variability in harvest.

The researchers also integrated uncertainty in the future productivity of populations (e.g. as a result of changing climate and habitat quality) into the simulations.

They found that harvest policies performed similarly relative to one another but that the magnitude of the trade-offs changed. In an uncertain future, forgoing a small amount of harvest had proportionally higher conservation benefits than in the scenario where population dynamics remained stable through time.

Dr. Connors emphasises that this study does not advocate for any one harvest policy, but rather helps improve understanding of trade-offs in the system, thereby increasing transparency when choosing any one particular management strategy.

“[This research] allows for a common backdrop against which fishery managers and watershed residents can collectively evaluate the consequences of alternative actions, and with which to understand the consequences of making one set of decisions versus another,” says Dr. Connors.

These harvest policy simulations and the visualisation of these trade-offs (which can be viewed via an online app) are now being used to foster more collaborative management of the resource.

For the first time, Dr. Connors says, Kuskokwim residents and state and federal government agencies have begun discussions to formally engage in a collaborative decision-making process that will shape the way the fishery is managed in the years and decades to come.