A new study has shown that, over the past eight decades, hatchery-reared Chinook salmon (Oncorhynchus tshawytscha) in the California Central Valley (CCV) have been transported increasing distances from their source hatcheries and released closer to the ocean.

The study’s authors, from the University of California (UC) and NOAA, suggest the practice of transporting juvenile fish closer to the ocean (called trucking) could dilute local adaptations and erode long-term population resilience.

The researchers analysed data from the five CCV production hatcheries, from which nearly 2.2 billion Chinook have been released since 1941.

They found an overall increase in the average distance hatchery fish were transported; particularly since the 1980s (when the practice of trucking directly to the San Francisco Bay began) and reaching a peak during the 2014‒15 drought.

The researchers also analysed eight years of adult spawner returns and found the further fish were released from their source hatchery (and river of origin), the more likely they were to fail to return to their natal stream i.e. stray. 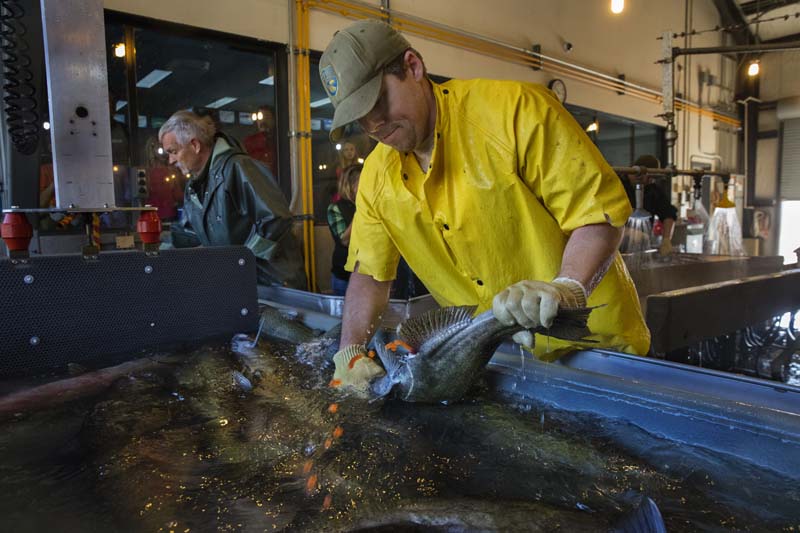 Dr. Anna Sturrock, Research Scientist at the UC Davis Centre for Watershed Research and lead author on the study, says the practice of trucking prevents hatchery fish from ‘mapping’ their environment.

Trucking bypasses this process, making it difficult for hatchery fish to find their way home.

“All salmon exhibit some degree of straying, which is really useful for colonising new rivers and avoiding inbreeding effects,” she says.

“But when we’re trucking fish to the Bay, we’re sometimes seeing more than 80 percent of them straying into other streams when they return to spawn.”

As a consequence, Dr. Sturrock says fall run Chinook salmon from throughout the CCV have become genetically and demographically homogenous.

The high straying rate of trucked fish erodes local adaptations and prevents their re-emergence, which in turn leaves the CCV stock vulnerable to disease outbreaks and large swings in abundance.

According to Dr. Sturrock, one way to reduce straying rates and safeguard population resilience is to return to releasing hatchery-reared fish on-site, thus allowing them to make the olfactory maps they need to return home.

Over the past century, the Sacramento-San Joaquin River Delta (the system that connects CCV rivers to the San Francisco Bay) has undergone significant change.

Historically, the Delta was a salmon-friendly tidal wetland. Now, Dr. Sturrock says, it has transitioned to a sharp-edged, highly-engineered water conveyance system—one with deteriorating water quality.

“In the 1970s, there was [this] unprecedented drought, coupled with an increasing awareness that the survival of fish released on-site can be very low,” Dr. Sturrock says.

“There was lots of interest in answering the question, ‘How can we avoid this inhospitable gauntlet and support the fishery?’”

Since the 1980s, trucking she says, was seen as the answer.

For example, during the severe drought of 2014‒15, more than 99 percent of CCV fall run hatchery fish were trucked and released within 20 km of the Bay.

Emergency trucking has also been used as a tool to rebuild salmon stocks and support the CCV Chinook fishery, in particular, following the 2008 stock collapse.

The CCV Chinook fishery was closed for the entire 2008 season along most of the west coast, from just south of the Washington-Oregon border, down into California. It opened again in 2009, under tight restrictions.

“The reality is that after the stock collapsed in 2008, the fishery would have taken a far larger hit if it weren’t for hatchery supplementation,” Dr Sturrock says.

“However, in recent decades, natural stocks have been swamped by hatchery-produced fish, and the long-term genetic, demographic and economic consequences are yet to be fully understood,” she says.

“As trucking becomes increasingly popular, Dr. Sturrock would like to see more research into the survival benefits that trucking provides and tools for managers to better understand the trade-off between increases in short-term abundance and long-term population resilience and fisheries stability.